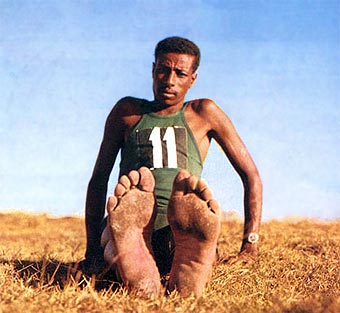 Natural running dates much further back and there have been ancient tribes throughout our long drawn history who have lived close to nature, in every terrain with only the soles of their bare feet doing the talking. In fact this concept of a natural running style has been recently popularised by Christopher McDougall’s book- ‘Born To Run’ based on the Native American tribe The Tarahumara Indians – known for their amazing ability to run barefoot for miles and miles is not some deep ancient hidden secret.

“Our Feet were made for running. Humans have engaged in endurance running for millions of years, but the modern running shoe was not invented until the 1960s. For most of human history, runners have been barefoot or wore minimal footwear such as sandals or moccasins with smaller heels and little cushioning.”

Even in competitive sports history, the first to race an Olympic marathon barefoot was a Tswana tribesman Len Tau representing South Africa in 1904 and then came Abebe Bikila an Ethiopian whose bare feet scorched the streets of Rome to give him the Olympic gold medal in a world record time and making it the most famous barefoot victory in modern history. More recent still, Zola Budd set several World Records in the 1980’s and make a big impact on the running world by training and racing in bare feet.

Running barefoot forces you to land on your forefoot and midfoot instead of your heel, as you do in the longer strides you take in constructed footwear. The result is more efficient transfer of energy; reduced impact on the joints in your feet, ankles, and knees; and strengthening of the muscles in your feet.

And the one major benefit is the experience of it that stays with you and develops a ‘feel good’ factor, which is incomparable. Running barefoot or minimalist style is hugely liberating as having next to nothing on one’s feet brings you closer to mother earth in every possible way. You are also able to feel the real difference in running between grass, pavement, dirt tracks and every possible terrain. Also the idea that less weight on your feet helps you go faster is not rocket science, nor an ancient secret preserved over thousands of years by lost tribes.

Get Started with Barefoot Running

Whilst minimalist running is the strategy for champions, for most of us the transition from regular shoes to minimalist/barefoot running shoes must be gradual, else it comes with its own set of health warnings. If you have spent most of your adult life in highly constructed trainers then switching suddenly to barefoot shoes requires a certain amount of ‘breaking in’. Your body needs to adjust.

Take your time to first wear them indoors for a few hours each day; go for walks with them and, as you grow more comfortable with the fit and the feel, that’s when you start to begin your ‘minimalist training’ journey. Take it slowly and easily, speed and endurance will gradually follow.

Don’t forget, in nature, even evolution and adaption is a gradual thing.  Only fools rush in, as they say

So get started folks and in the next blog – we shall talk about the different types of barefoot shoes.

In the meantime feel free to mail us and ask questions on any thing running related or about the shoes we have on offer. Contact Us.

Not sure about barefoot running? If only there was a way of going half-barefoot to see if you like it…

Winner of the ISPO Award 2012, the Running Pad is designed and manufactured by Starringer in beautiful Bavaria, Germany. Starringer claim the Running Pad is of minimal weight, protecting the foot only where it is needed, and is a great alternative for long-distance and high temperature runs.

The barefoot revolution has certainly brought us some of the most peculiar-looking shoes over the last four years (think Vibram FiveFingers, One Moment, ZEMgear), but the Freewheel Running Pad is certainly the most bizarre. It is genuinely innovative. It’s neither a shoe, nor a sandal. It’s not a glove, nor a hoof.

From the top, you could easily mistake the Running Pad for a sandal. Very similar to a Birkenstock. I particularly like the use of the straps – very trendy. But then we look at the side profile. The sandal has no sole under the heel, nor does it have anything to wrap around the back of your foot.

Now I haven’t tested this ‘shoe’, and the jury is out on how they would perform, but I really fancy having a go at these. To me, they look like something you’d see on a half-horse/half man. As a Sagittarius, my Zodiac symbol is the archer – maybe that’s why I am attracted to them…

Keep up to date with Feetus on:

Skora Running are releasing some fantastic new minimalist running shoes this year. Having seem them a while back in 2012, they were brought to wider attention at the recent Outdoor Retailer show.

The Phase-X made Gear Junkie’s Best in Show list and was regarded by RunningShoes.com as ‘Best Shoe in Show’. Impressive.

The two shoes have an outsole constructed out of IBR (injected Blown Rubber), which is lighter and more flexible than regular rubber. The cushioning from IBR also means that an EVA midsole is not required. Although IBR is less resistant to wear, Skora have strategically placed rubber on the outsole to reduce the effects of wear.

When Can We Expect to See Them?

These shoes are yet to be released in the US, but rumour has it that they should hit the shelves in March. Having spoken with Skora recently, they are adamant that they will have a UK distributor wrapped up within a matter of weeks. Whether this means the UK will have access to the full range or just the Base and Form shoes, it remains to be seen.

Regardless, I am 100% sure Skora will make a massive impact over here in the UK!

For more information, AnotherRunner has an impressive write-up.

Our Feetus.co.uk store goes live in February. Make sure you keep up to date at Facebook and Twitter to be in with a chance to win some fantastic prizes as part of our store launch, and for some exclusive discounts.

I first read this book back in 2009 whilst nursing a knee injury and trying to find a solution. Much of the content mirrors what Christopher McDougall covered in his bestseller Born to Run, and other subsequent running publications related to running performance.

He points out that no professional athletes compete in “overstuffed, wedge-heeled orthopaedic boots that most joggers wear”, and that “the difference between running in bare feet and in the typical jogging shoe can be up to 30 seconds a mile.” As such, Pirie always advised his trainees to wear the lightest shoe they could find. “These shoes” Pirie continues “should have the same amount of padding at the front under the toes as at the rear, with no wedged or flared heels.”

In Running Fast and Injury Free, Pirie’s advocated technique is not too dissimilar to the POSE Technique, or what is commonly regarded as the natural / barefoot style. He advises taking shorter steps (3-5 steps per second) as opposed to striding and heel-striking, which wastes energy on vertical movement of the body (Joggers ‘bobbing’ up and down). He also describes his collaboration with Adidas-founder Adolf ‘Adi’ Dassler on designing running shoes.

Pirie was a controversial character, and he doesn’t shy away from the odd controversial statement in this book. It is at times contradictory (“walking damages running”, then later adding he would add 4-hour walking sessions to his training. Yet ‘Running Fast and Injury Free’ is still an enjoyable read with some fantastic advice, and by taking heed of some of Pirie words you will probably cover more ground faster.

You can both read the book for free online, or download the PDF here: http://www.scribd.com/doc/13695/Gordon-Piries-Running-Fast-and-Injury-Fre

It never ceases to amaze me how much ‘spin’ big companies use when marketing a new product. After watching Asics’ latest video pushing their hideous ‘Gel Nimbus 14’, it left me gobsmacked.

To me, the shoe looks more suited to an astronaut. Or maybe somebody imitating an astronaut, who needs a super wedge of cushioning to simulate slow-motion bouncing in the absence of moon gravity.

With spiel like this, it’s not surprising that a staggering 80% of runners get injured each year. How many of us have suffered with ‘runners knee’, ‘shin splints’ and ‘plantar fasciitis’? How often do people have the best intentions of ‘getting in to running’, only to get injured and conclude “Running isn’t meant for me”. With the amount of money invested in technology and biomedical science, surely we can develop runningwear that can prevent running injuries?

That’s why I am a massive fan of VivoBarefoot. Rather than plough all their capital in to creating and marketing gimmicks such as a ‘guidance line’, they instead invest in research and training. They make the effort to educate the customer, teaching us the essentials about best running technique. They offer science over opinion.

http://www.feetus.co.uk goes live next month, where I will be offering advice on running technique and sharing my experiences of running barefoot and with minimalist shoes. For now though, here are the five basic principles of good running technique.

Keep up to date: