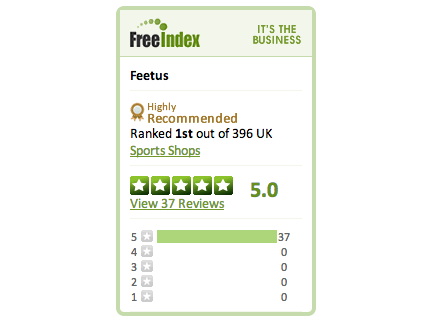 What Customers Think of www.Feetus.co.uk

Ever stumbled across an online store; you like their prices, the site has a nice feel, but you have never heard of the company and it might just put you off? I have. What’s the next thing you do? You might type in Google: “customer reviews of website x” to see what other people think of them… Depending on how others have rated that particular online store, this makes an impact on your decision…

Luckily for us, our customers love us. We love to give the best possible customer service. We like to throw in freebies, and surprise our customers. We’re here to offer help and advice, whether you email us, phone us (07749 545 631), or chat to us via our online chat facility. And to prove that our customers love us, here’s a list of our most recent reviews: 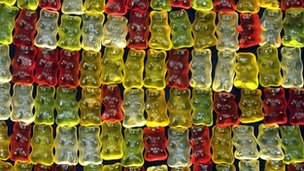 As a customer of Feetus.co.uk, you will know that we always like to throw in a free treat in with your box of shoes. All orders over £50 get a free Feetus ‘Fappa’ anyway, but almost always, you will get a little bag of Haribos in with your order!

But today, Hans Riegel, the son of the sweet maker’s founder, died of heart failure in Bonn, the company said in a statement.

Mr Riegel was in charge of marketing and distribution for Haribo and invented its “kids and adults love it so” slogan.

According to the BBC:

“Mr Riegel inherited the firm from his father in 1946 and built it up into a firm that now employs 6,000 people.

The company, which also makes sweets in the shape of cola bottles, jelly beans and milk bottles, has 20 factories across Europe and an annual turnover of about $2.5bn (£1.6bn).

Haribo is derived from the founder’s name and the German city where it is based – HAns RIegel, BOnn.”

Feetus.co.uk will still be giving away Haribos with every order, whether you’re getting the newest Vibram FiveFingers, a pair of Xero Shoes huarache Sandals, or one of our range of clothing and accessories.

Many of us see Vibram FiveFingers and think ‘Vibram? They’re a new brand. I don’t know whether to trust these or to stick with Nike / Adidas / Asics / New Balance / etc [delete as appropriate].

But Vibram have been around a long, long time. In fact, Vitale Bramani founded Vibram the same year that Dame Shirley Bassey was born; the same year than J.R.R. Tolkien’s The Hobbit was published; and back when our George VI was still King.

You may recognise the yellow octagonal Vibram logo. It can be seen on rubber soles around the world on shoes and boots designed for outdoor purposes, fashion, performance, work and orthopedy. Having almost 80 years in the market, Vibram is a renowned leader synonymous with performance, quality, innovation, design and safety.

Vibram created the first sole made from vulcanised rubber, after Vitale Bramani applied the same technique used by tyre manufacturer Pirelli, applying the rubber under his mountaineering boots.  That kind of performance, reliability, and durability had never been seen before, and since then Vibram has been the sole of choice for outdoor shoe manufacturers.

To further elaborate on the strength of the brand, here are some other brands that are now industry standard:

Since 1937 Vibram have applied their experience and unique know-how to develop the worlds most technologically developed soles. Today, 99% of the US Military wear Vibram soles.

It is fair to say that Vibram revolutionised the world of mountaineering, and now, with Vibram FiveFingers, they are revolutionising the sport of running.

Even Vibram FiveFingers are not as new as we think. Many of us think that they have only been around a couple of years at most. In fact, it was 2001 when the idea of Vibram FiveFingers was first proposed by Robert Fliri, an industrial designer, to Marco Bramani, the grandson of Vibram founder, Vitale Bramani.

2004 saw the patent filed, and in 2005 the Vibram FiveFingers went in to mass production. Soon, Fliri arrived at Vibram to begin his work in a team of experts to redefine and realise his idea of a shoe especially created for bare feet. The minimal footwear revolution was born, directly inspired by the barefoot phenomenon. Vibram had developed what is often referred to as a ‘barefoot shoe’: a flexible glove for your foot, with a Vibram rubber sole, each toe (finger) having its own ‘pocket’, helping the articulation of the foot, whilst stimulating the muscles of your lower limbs, thus giving a higher sense of wellbeing to the whole body.

Vibram continue to dedicate themselves to innovation. Their appreciation of continuous development and improvement has seen Vibram open their mega Technology Centre in Guangzhou, China. If you’re wearing a pair of Vibram FiveFingers, you can bet they’ve been researched, prototyped, tested, and manufactured inside this 41,000 square-metre innovation plant.

Who wants a pair? Click here to see our full range – and remember – every pair of Vibram FiveFingers comes with FREE DELIVERY and a FREE FEETUS NECK TUBE.

Ran the Hardmoors 30 on New Years Day. What a race! Glorious views! Great people! …and it didn’t even rain!

Really enjoyed the first 10 miles, though by starting too fast, I only had myself to blame for my 20-mile demise. After scoffing a few jellybeans and a pink doughnut at the checkpoint at Robin Hood’s Bay, mile 13, I was sick. This could probably be attributed to too much alcohol over Christmas, but from this point onward, I felt like, joint by joint, limb by limb, my body started to say “Why should I help you out today? You should have put in more training! You shouldn’t have drunk so much over the last week! Pig!”

If I had ran with a Garmin on my wrist on the day, the analysis would provide a story in itself. After hitting Whitby at mile 19, it was a welcome relief to be at a checkpoint and actually have an excuse for stopping. I hung around for five minutes, and headed back out on to the (surprisingly busy, considering it was NY Day!) streets of Whitby.

A wrong turn (or rather, missing the left-turn on to the Cleveland Way) after the 199 steps to Whitby Abbey added insult to injury. From here on, the trails were so muddy I could only liken the conditions to Glastonbury.

I cursed every step taken. I wanted to give up. I was bored of feeling shit, and fed up of just shuffling along… I was cursing myself for having a sober, half-ten bedtime the night before when I could have enjoyed an Indian and polished off a crate of beer with the wife. It sounds odd, but at the time I would have easily traded places with someone nursing a New Years hangover. Near the final ascent, a driver asked if I wanted a lift. It was so tempting to eat the forbidden fruit, but I refrained.

Taking another wrong turn less than half a mile from the finish summed up my day. I followed the trail for about half a kilometre, and only realised my stupidity after a pair of walkers told me no other runners had passed this way.

I hit the finish line at the Village Hall in 6 hours, 3 minutes. Disappointed I was, but in hindsight I am extremely proud of finishing after what was quite a long period of feeling low and swearing at mud. It is a fantastic route through 30+ miles of breathtaking scenery and I would recommend it to anyone 100%!

Now, being a man, I have never given birth, but I because I’ve got two kids myself I feel ‘almost’ qualified in making this statement. Ultrarunning can be very much like childbirth. The ‘doing’ is tough, it’s horrible, and you vow never to do it again, but straight after, these feelings are replaced with something you are extremely proud of. The pain is forgotten and you want more!

A partnership is created…

I really enjoyed Running Food’s flapjack on the day though. I had one an hour before the race, and another during, and I definitely felt the benefit from them, and got a huge boost from eating something more substantial than a gel or some sweets.

I had kept Tim’s business card from the race and called him a couple of days after the race to discuss the possibility of becoming a reseller of his ‘RunningFood’ products. What a top bloke! We spent a good hour on the phone covering all topics. I’m pleased to say that Feetus will become a reseller of Chia Charge and that magical flapjack, bringing RunningFood’s stuff to the hands of the UK barefoot and minimalist running market at feetus.co.uk.

It hadn’t occurred to me on the day, but I believe these chia-infused super-snacks will sit perfectly against the brands and barefoot and minimalist items I will be selling at www.feetus.co.uk. Can’t wait!

As for running. I can’t wait for the next race. The Hardmoors Osmotherley 26.2 sounds perfect!